Solomon's Baby in the Middle East 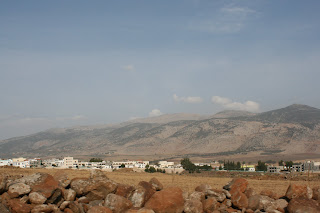 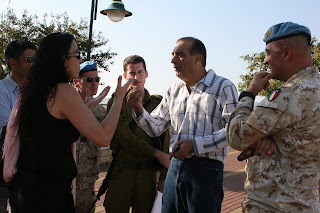 "Over our dead bodies!" Najib Khatib shouted in Arabic as I stepped out of our car in Ghajar, a picturesque village cut in two by the boundary between the Israeli-controlled Golan Heights and Lebanon. "Nobody tells us anything!" he said, his arms flailing in the air like a referee signaling a dramatic touchdown.

Khatib, Ghajar's spokesperson, can be forgiven for the awkward greeting. Israel, which administers the village with its approximately 2,000 residents as a military area, doesn't normally let foreigners in. I've arrived -- with an escort of a group of Israeli analysts and U.N. officers as well as a squad of IDF soldiers -- to discuss an issue weighing heavily on Khatib's mind: Ghajar's nightmare of boundaries and territorial ambiguity. Khatib's anger stems from the introduction of a U.N. plan to resolve the mess by placing the northern neighborhood of Ghajar under Lebanese, not Syrian, sovereignty. For Ghajar residents, whose loyalties rest strongly with their Syrian cousins, there is little satisfaction in trading Israel's Star of David for Lebanon's cedar flag.

Israel occupied Ghajar in July 1967, a month after it captured the Golan Heights from Syria. Unlike most of the Golan's Druze communities, Ghajar residents accepted Israeli citizenship when the Knesset voted to annex the Golan in 1981, but continued to insist their village was rightfully a part of Syria.

When Israel withdrew its troops from Lebanon in 2000, U.N. cartographers -- who were unable to enter Ghajar due to tensions between Israeli forces and Hezbollah -- drew the temporary demarcation between the states, called the "Blue Line," through the village. After the Israel Defense Forces (IDF) withdrew south of the Blue Line, they left the boundary in the village unbarricaded so as not to affect daily life. Instead, they constructed a security fence south of the village with a gate for residents to cross into Israeli-controlled areas of the Golan Heights. For a time, life in Ghajar was good: Free to re-establish some degree of normalcy after the long-running guerrilla war between Hezbollah and Israel in South Lebanon, many residents fixed up their homes and bought new cars.

Then, in the most audacious attack since the Israeli withdrawal, Hezbollah launched in November 2005 an unsuccessful raid into Ghajar to kidnap Israeli soldiers. For the Israelis, this confirmed that Ghajar was the weakest link in their defenses along the border with Lebanon.

When the "Party of God" successfully abducted three Israeli soldiers elsewhere along the Blue Line and sparked a war in July 2006, Israel occupied all of Ghajar, blew up a Hezbollah command post on the northeast corner of the village, and reinstituted the security fence some 500 meters north of the Blue Line, along the northern edge of the village. Israeli forces have remained in what is now referred to as the "northern neighborhood" of Ghajar ever since. Although this solves Israel's security concerns, it places Israel in violation of U.N. Security Council Resolution 1701, the diplomatic agreement that ended the 2006 Israel-Lebanon War, which calls for a withdrawal of all foreign forces from Lebanon.

According to the United Nations Interim Force in Lebanon (UNIFIL) plan, Israel would hand the pocket of Ghajar between the Blue Line and the northern security fence to U.N. administration. Lebanon's liaison officer to UNIFIL would hoist Lebanon's flag over the "northern neighborhood," allowing Lebanon to claim sovereignty over the disputed territory until its ultimate disposition can be negotiated between Beirut and Damascus. But this essentially means an indefinite wait: With the Golan Heights still under Israeli control, Israeli-Syrian peace negotiations are still needed to negotiate the terms for the return of the Golan to Syria. As Syria and Israel are not on speaking terms, it could be some time before Ghajar even shares a border with Syrian territory.

Although the UNIFIL plan is relatively straightforward, most other things in Ghajar are not. Khatib and his fellow villagers in Ghajar are Alawites, the obscure offshoot of Shiite Islam that dominates Syria's Assad regime. Speaking with Khatib, I notice he has his Syrian brethren's stunning bluish-green speckled eyes -- but his Arabic accent is totally different. When I mention this fact, Khatib's motionless stare reveals another motivation behind the village's unstinting loyalty to Syria: fear. Any sign of ambivalence about Ghajar's ultimate ambition for reintegration into Syria would undoubtedly be punished if Syrian authorities eventually do assume control over the village.

Ghajar is also focused on keeping its Israeli presence because of more immediate interests. Designation as a Syrian village in the Golan Heights means Ghajar's residents can continue to benefit from the services that accompany Israeli citizenship while still allowing for the possibility that the Golan, and the residents of Ghajar, will someday be returned to the Syrian fold.

Meanwhile, Israelis remain skeptical of their neighbors in Ghajar. It is well known that, before 2006, Hezbollah moved narcotics through Ghajar into Israel. But what the Israelis in my convoy are reluctant to discuss are media reports that Israeli drug dealers -- mostly from Israel's Arab community -- paid Hezbollah with vital intelligence on Israeli military and civilian sites. This detail made Israelis suspicious that the funding for the new cars and home improvements in Ghajar was coming from Hezbollah.

The Israelis also have reason to feel queasy about the precedent set by their withdrawal. Although placing the disputed territory in UNIFIL trusteeship seems pragmatic, it has serious implications: For the first time, Israeli citizens will be placed under U.N. administration -- a precedent that could be applied in the West Bank and Golan Heights.

Making this even more complicated is that nobody seems to know where the border should be. The French, during their "mandate" over Lebanon and Syria in the period between the two world wars, didn't demarcate the Lebanese-Syrian border, leaving a territorial ambiguity that continues to this day. U.N. cartographers drew the Blue Line from a point northeast of Ghajar to a point on the bend on the Hasbani River just south of the Wazzani Springs, Ghajar's water source. Then, more recently, Israeli cartographer Asher Kaufman argued that the line should be drawn to a point somewhere north of the Wazzani Springs, meaning far less of Ghajar could lie in nominally Lebanese territory.

To prove the village's case, Khatib takes us on a tour. As our caravan of cars and trucks begins to move through the town, I notice that, just like in Alawite villages on the Syrian coast, Ghajar holds none of the standard signs of Islam in the Arab world -- mosques, madrassa, or veiled women. "We have crossed the line!" Khatib exclaims at one point, apparently at random. In the eyes of the international community, we are now in Lebanon.

Nearly jumping out of his car seat, Khatib shouted "There!" and pointed over my shoulder at what were clearly pre-1967 black basalt stone houses. He confirms what Lebanese in neighboring villages told me the previous week: Sheikh Muhammed, a local notable and Khatib's grandfather, built the structures in the mid-1950s and registered them in the Syrian Ministry of Interior. He holds this out as proof of Syrian sovereignty over the land prior to 1967. According to Khatib, the border should be 500 meters north of the current security fence.

The details of the UNIFIL plan to take control of the village are being hammered out in trilateral meetings between UNIFIL, Israel, and Lebanon -- the only point of contact between the two countries' governments since the end of the 2006 war. The proposed withdrawal has opened up a Pandora's box of potential legal questions: Can Israel supply a part of Lebanon with electricity? What happens if a villager in the north has a medical emergency and needs treatment in Israel? What legal rights do the northern residents have in Israeli courts?

The success of the Israeli withdrawal will depend greatly on the reaction of the Lebanese political elite. According to some Lebanese politicians, a return of Ghajar will show that diplomacy with Israel works, undermining Hezbollah's resistance narrative. But when Israel leaked that it was preparing to withdraw from Ghajar ahead of Lebanon's June 7, 2009, parliamentary election, in a bid to support the March 14 bloc led by Lebanese Prime Minister Saad Hariri, Hezbollah and its allies accused Israel of meddling in Lebanese domestic politics. Will Hariri, who now leads a government that includes Hezbollah, hail an Israeli withdrawal as a victory for "the resistance" or merely talk about "liberation"?

Washington hopes the withdrawal will also be a small step to help pull U.S. President Barack Obama's administration out of another twilight zone: the Middle East peace process. Diplomacy on Ghajar could provide momentum to the trilateral talks, leading to a resurrection of the Israel-Lebanon Mixed Armistice Commission (ILMAC) -- a body that was designed to monitor the cease-fire following the 1948 Arab-Israeli war, and last met in 1978 to deal with Israel's invasion of South Lebanon. Even Hezbollah's ally, Lebanese Gen. Michel Aoun, is in favor, with the caveat that the armistice be "temporary, maybe even for 10 years." A revived ILMAC could be a good venue to resolve the status of the remaining territorial disputes between Israel and Lebanon, which are used by Hezbollah to justify retaining its weapons.

After 30 minutes in Ghajar, the IDF soldiers signaled that our caravan had attracted far too much attention and it was time to go. Khatib's hands trembled as he shook mine. "Remember, over our dead bodies," he said. As we headed for the security gate, young children with light hair and eyes like Khatib's piled out of the village school, which rested where the Blue Line should be. When our car slowed to let them pass, their carefree smiles quickly melted into frowns. In this border hamlet where things are seldom as they seem, they seemed to know that the bodies Khatib offered up could very well be theirs.

Andrew J. Tabler is Next Generation fellow at the Washington Institute for Near East Policy and author of the forthcoming book In the Lion's Den: Inside America's Cold War with Asad of Syria.
Posted by Andrew J. Tabler at 1:27 PM