In a Corner
Even with little to show, Obama still hasn't given up engaging America's foes. In Syria, it might just work. 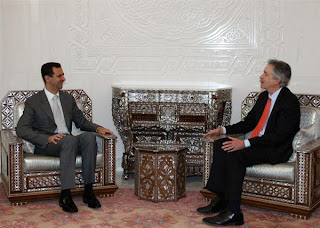 Khaled Al-Hariri / Reuters-Landov
As the White House was naming the new ambassador in Washington, Under Secretary of State William Burns was meeting President Bashar al-Assad in Damascus.