Obama says US aid should be “sustainable” – free of corruption 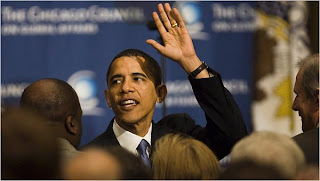 I had front row seats to Barak Obama’s five-point foreign policy speech today “The American Moment” – hosted by the Chicago Council on Global Affairs। It indicated the presidential hopeful understands the corruption problems surrounding foreign aid. Exactly how he is going to address the problem remain unknown (maybe we should ask Samantha Power, one of his foreign policy advisors). At a talk I gave on Syria with the Council later that day, many in the audience raised the same question. My answer: use the private sector, not just handouts.

Obama outlined 1) a responsible end to the Iraq War, including a phased withdrawal by March 31, 2008, 2) a 21st century military that is better equipped, 3) securing and arresting spread of WMDs, 4) rebuilding US alliances world wide, including use of United Nations, World Bank, etc. (which he added, correctly, are in need of reform) and 5) Investing in a “common humanity” – including a doubling of US foreign aid to $50bn by 2012.

Unexpected and refreshing, Obama called on his experience in his father’s Kenya and openly cited the importance of reigning in corruption surrounding foreign aid – a big problem in Syria today. Under current US sanctions (going back to 1979), none of it will make it to Syria soon – but it could serve as a wake up call to our European allies in Syria to get their act together.

His delivery was confident and convincing, and he brought the house down. But completely missing from the speech was the word “democracy,” or “human rights” (except concerning US treatment of detainees in Guantanamo). This wasn’t unexpected, and puts him in line with other Democrats (and some Republicans) spilling through Damascus’ gates these days.
Posted by Andrew J. Tabler at 11:49 PM

Andrew, fascinating article in yesterday's Times Magazine. But in response to this post: your one-sentence precis regarding your solution to America's foreign aid problems -- "use the private sector, not just handouts" -- sounds to me like a terrible, terrible, terrible idea based on a very ill-thought-out analysis of the problems with current US foreign aid programs. I'm not really sure where you're headed with this idea, which could mean a lot of different things, but if you're headed the same place most other people are headed who emphasize privatizing aid as a solution, then I think you're headed about 180 degrees in the wrong direction.

1. The US does not really do "handouts" -- hasn't since the '80s at the latest. The mantra of "sustainability" has completely penetrated the aid system for a decade already. Back in the '60s we did way too much giving away of grain, heavy equipment, and buildings, most of which was never used. But that's not where the problem lies anymore.
2. "Private sector" and "sustainable", as applied to aid, have very little to do with each other. In the aid context, "privatizing" generally means bringing in NGOs and consultants to do jobs once performed by government professionals. This frequently costs more, and the consultants often have less localized or subject-specific knowledge than the agency professionals they replace. No single US foreign aid endeavor has been more thoroughly private-sector than our aid efforts in Iraq. This was also the least sustainable and most costly foreign aid effort in history, and most of it lies in dust two or three years after the funding was disbursed. PEPFAR is rife with similar stories. Notably, the first head of PEPFAR and until Friday head of USAID, Randall Tobias, was a private-sector drug company CEO.
3. The remedy with which we've attempted to cure US foreign aid, massive monitoring and evaluation, has often proven to be a disease of its own. Each donor sets their own monitoring indices for the programs they fund. Each donor will also fund only certain parts of each program (the US won't fund needle exchanges, etc.). So every program needs many donors, and has to report indices many different ways on different schedules. Small aid programs must often devote one full-time local English-speaking staff member with a Master's degree just to handling reporting requirements -- this in countries possessing only a few thousand people with Master's degrees. One result is massive salary inflation for people with Master's degrees to handle reporting requirements; and aid program budgets start to consist largely of the salary required to pay staff to fulfill the reporting requirements! "Sustainable"?
4. The need for US foreign aid programs to legitimate themselves to Congress and others has become a cancer. Aid programs are monomaniacally focused on fudging their indicators to make them look positive, or on coming up with happy personal anecdotes to put in their glowing promotional reports. (This is actually an explicit USAID mandate to in-country administrators.) They are also, in order to justify their funding, absurdly micromanaged by Washington administrators who have no idea what's going on in-country. This, in fact, was Randall Tobias's whole job: to ensure that US aid is more coherently lined up with US policy priorities. Vietnam needs clean water and wants to invite an expert from Hawaii to advise -- too f'ing bad! That's not a policy priority for Washington; we're focused on legal reform for fighting discrimination against PLWHAs, so we're sending you a human rights lawyer.
5. This salesmanship disease is destroying the credibility of US aid programs in foreign countries in much the same way that the Bush administration's dishonest sales discourse has destroyed US credibility overall. US aid programs are driven to lie about their results, create bogus statistics, and speak in ways which have nothing to do with local priorities and everything to do with donors' priorities. So no one takes them seriously. THAT is priority number one for US foreign aid -- certainly not yet more useless and destructive contracts for private sector consultants.

Sorry for the rant, but this subject lies close to my heart, over here in Vietnam.